Thoughts on Jewelry II: Why?

Let this start at the beginning: Why jewelry?

The best answer to this "riddle" could be best summed up by something I heard Otto Kuenzli say at the Zimmerhof symposium for jewelry which took place 2007. Prof. Kuenzli said, more or less in these words, the scientific community (archaeologists to be more specific) has long recognized that the first time ever that human beings created an exterior mirror image of that which was going on in their brains (interior), they did it through the activity which we currently could call jewelry making.

In short mankind’s first ex-pression was jewelry.
SO, my answer to: why jewelry? is: why even ask?

It is certainly true that in the course of time jewelry has adopted characteristics associated to status and wealth to such degree that most people exclusively recognize in it a tool for show, a medium which expresses one’s status and one’s wealth (or at least those which one wishes to have), a means of representation. But today more than ever thousands of young jewelry artists are challenging this conception by creating works of jewelry which attain not only the highest craftsmanship levels, but highest conceptual, content based levels as well. After all, we HAVE been making jewelry forever. It might just be the oldest profession of mankind, even older than prostitution, after all. 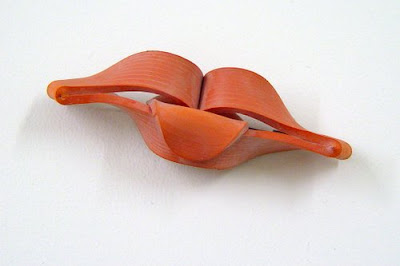