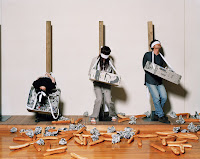 DNA is proud to present for the first time in Europe Tatsumi Orimoto´s Punishment. Following in the footsteps of the artist's “Communication Art”, this performance also features bread as its main element. Orimoto often uses bread because of its fundamental and basic nature. However, he does not only use it as a symbol for universal communication – something to which everybody can relate – but also as an allegory for Western culture. In the occidental context bread does not only take on meaning as part of the diet of the population but also because of its symbolism in Christianity, where it represents the body par excellence.

With this background Tatsumi becomes in Breadman a sort of living sculpture, his head twined with a bundle of baguettes, who brings art to the people. Nevertheless, bread and its former mentioned function as a tool for communication take on in Punishment a more tragic nuance. Twenty-six blindfolded people, tied to a mast, are carrying a box full of bread. One after the other, each of them falls over, spilling the bread on the floor.
Tatsumi Orimoto (Kawasaki, 1946) studied at the Institute of Art, California. In 1971 he moved to New York, where he assisted Nam June Paik and was introduced to Fluxus. He returned to
Kawasaki in 1977, where he currently lives and works, and takes care of his mother. His
performance Breadman was shown in several countries in public as well as institutional contexts, such as the Biennales of Sydney, Sao Pablo and Venice.